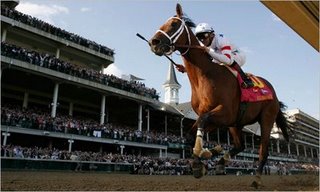 1 Big Brown 2-5
The undesirable 1st post position and the quarter crack in Big Brown's hoof don't appear to be major concerns for trainer Rick Dutrow and the colt's connections. Big Brown dominated both the Kentucky Derby and Preakness, winning by a combined 10 lengths. Can Big Brown handle the mile and a half distance of the Belmont and become the first Triple Crown winner since Affirmed in 1978? Can any horse in this seemly over-matched field step up and challenge Big Brown?

2 Guadalcanal 50-1
The late entry is the longest shot in the field.

4 Denis of Cork 12-1
Denis of Cork looks as though he will have no problem with the Belmont's distance. He looked as though he was just getting ready to run when we hit the wire for a third place finish in the Derby. Denis of Cork will likely be well rested as he sat out the Preakness. Derby jockey Calvin Borel will step aside for jockey Robby Albarado who was aboard the colt in his victory in the Southwest Stakes. Denis of Cork looks like a strong choice to hit the board or to throw in for exotic wagers.

5 Casino Drive 7-2
The Japanese trained horse is undefeated in two career starts and looks to be the only legitimate challenger to Big Brown in the field. Casino Drive had a 5 and 3/4 lengths victory in the Peter Pan Stakes (Grade 3) in the horse's only race in the States. The last two Belmont winners (Jazil and Rags to Riches) share the same mare as Casino Drive (Better Than Honour). Can Casino Drive live up to the hype and repeat what his siblings have accomplished in The Belmont Stakes?

6 Da' Tara 30-1
Look for the Nick Zito trained horse to play the role of rabbit and set the pace for Saturday's race. Da' Tara could be a mudder as his only win came in the slop at Gulfstream Park.

9 Ready's Echo 30-1
The Todd Pletcher horse is a long shot, but could be built for the longer distance of The Belmont. Ready's Echo has a tendency to break slow out of the gate and surge late in the race.