How We Spent Our Summer Vacation by Scot Pollard & Brian Scalabrine

Share All sharing options for: How We Spent Our Summer Vacation by Scot Pollard & Brian Scalabrine 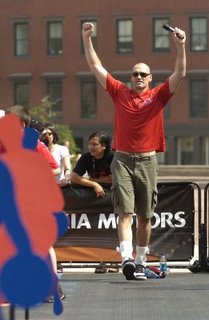 We are having the bestest summer ever! We have been traveling a lot and watching some basketball here and there. We have been to Atlanta, Cleveland, Detroit, and LA. We just got back from LA, which was fun. Scal seems to have a big fan base out here. Everywhere we went people were hounding him for autographs and pictures. It was wierd though, they kept calling him Michael and saying things like "you were great in Beautiful Girls". There are celebrities everywhere in LA. We even got to meet Kobe Bryant and Jack Nicholson! We used our connections to score seats near the Celtics bench for the NBA Finals! Scal even got to dress up like one of the players the other night! We really hit it off with the guys from the Celtics. They even flew us back to Boston on their private jet! Unfortunately the flight got delayed (I told Scal we should have held on to those AirTran standby tickets). Doc told us if we were good, we could maybe go to a parade later on this week!

Hope everyone is having a fun summer :)