Share All sharing options for: MLB taking it's jerseys and going home 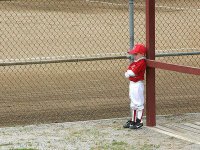 Apparently Major League Baseball has threatened to sue a youth baseball league in the Chicago area over the unauthorized use of major league team names. MLB stated that they would let the youth league use the MLB team names only if the league purchased the uniforms from MLB's official supplier at a much higher price. So now every team in the Tinley Park League is now known as the Bulldogs. Way to go MLB. Way to turn more young fans off from the game.

I would bet that 75% of all youth baseball leagues in this country use the names of MLB teams "without the expressed, written consent of Major League Baseball". Of the course the league that I played in as a child was obviously scared of the goons in MLB's legal department and opted for the much more depressing practice of naming teams after funeral homes and insurance agencies.

Here was The Colbert Report's take on the situation...