Share All sharing options for: 10 reasons to hate the...Baltimore Orioles

The O's have struggled to draw fans. The addition of the Nationals to the area haven't helped attendance either. The majority of the fans they do manage to draw are usually fans of the visiting team who are there to see the ballpark. Recently, it seems like there is an animosity towards these tourists at Camden Yards. I was down there for a Red Sox - Orioles game in May and there was a brawl in the stands.

2. Their Fans Yell "O" During The National Anthem

Not only is this extremely lame, but it's disrespectful. The name of your favorite team begins with the letter O, we get it. Just because "The Star Spangled Banner" was written in Baltimore doesn't give the city's residents the right to butcher it. This practice has even migrated beyond the Maryland border. I was at a Washington Capitals game this year and the Caps fans also yelled "O" during the anthem. 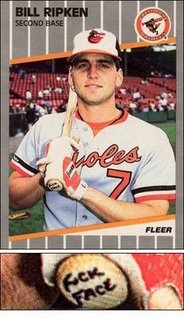 Of roughly 90 players named in the report, 19 player had played for the Orioles including 9 players from the 2004 team.
5. Everyone That Works at Camden Yards is Older Than Dirt
6. "Thank God I'm a Country Boy"
Just when you start to think that Baltimore could pass for a progressive Northern city, "Thank God I'm a Country Boy" comes blaring over the PA to remind you that you are indeed South of the Mason-Dixon.
7. Brady Anderson's Sketchy 50 HR Season
Anderson pretty consistantly hit 15-20 home runs a year throughout his career and then in 1996 hit 50. You're suspect Brady!

8. Babe Ruth was a Lefty


When the Orioles built Oriole Park at Camden Yards, they built a bronze statute of Baltimore native Babe Ruth near the park's entrance. The statue came out great except for one flaw: Babe is holding a right-handed baseball glove. Babe Ruth was a lefty. 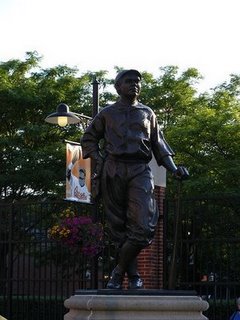 9. Orioles "Hall of Fame"
The Orioles honor their greats by putting their plaques up on a wall outside a restroom near the park's entrance.