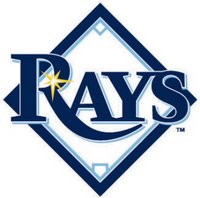 Recently St. Pete Times writer Tom Jones (disappointingly not the crooner) wrote a column entitled "10 reasons to hate the Red Sox". I will pick up where Mr. Jones left off and give you reasons to hate every team in Major League Baseball (or maybe just the American League), starting with Jones' beloved Tampa Bay Devil Rays. His name is Robert Szasz AKA "The Happy Heckler", but you probably know him as the d-bag who sits behind home plate and yells out lame heckles. Apparently he has cashed in on his pathetic notoriety and has written a book. 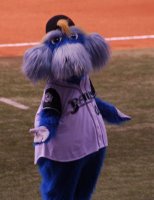 What is that thing?...besides disturbing

3. Tropicana Field AKA The ThunderDome AKA that depressing airplane hanger they call a ballpark


Catwalks have no place in baseball

Did the Religious Right persuade them to denounce the Devil?

This item made the Team History section on the Rays website:

"Personal Reasons" like spending all his time working on conspiracy theories and doomsday plots?

He is way too old to be part of the scene. These must have been Army-issued.

Almost as annoying as ThunderStix


Gomes is developing a reputation as a guy who loves to cheap shot guys during bench-clearing brawls. He blindsided Shelly Duncan of the Yankees in a Spring Training game this year and also threw punches at Red Sox outfielder Coco Crisp while he was being held down by several Rays. The guy is a coward, but TB fans call him "The Enforcer"

9. Forcing AL East Fans to Watch the "Double A's" 19 times a year for the past few years

10. Rays offered Wade Boggs cash to wear a Devil Rays cap on his plaque in Cooperstown

...unfortunately he is wearing a B in Cooperstown


The one reason to love the Rays:

They are able to develop young players and compete in the toughest division in baseball on a shoestring budget.
Next Time: 10 Reasons to hate the...Baltimore Orioles