Share All sharing options for: Chiarelli:"Take Off, Eh Hossa!" 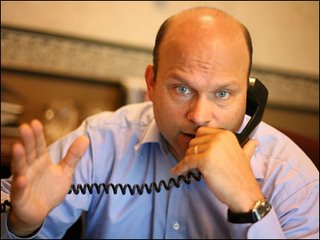 Marian Hossa chose Hockeytown over The Hub of Hockey. I for one am glad that the B's didn't throw a ton of cash at Hossa. They would not have been able to get him for $7.4 M like Detroit did. They probably would have had to offer him $9 M plus for him to even consider coming here. A contract like that would have pushed the Bruins over the salary cap and forced them to dismantle half their existing roster. Clearly Hossa wants a legitimate chance to the win The Cup. That is something that the Bruins simply couldn't offer him. Although there were a lot of ridiculous rumors floating around about the B's offering Hossa big money to come to Boston, I don't think Boston was ever on the top of his list.

Ignorant mainstream media members and the morons who haven't watched a B's game in 5 years (EEI callers) will claim that this was another example of the Bruins organization's penny-pinching ways. They will claim that owner Jeremy Jacobs wouldn't allow Peter Chiarelli to offer Hossa a large contract. That simply isn't the case. The NHL has a defined salary cap with no luxury tax, which means no team is allowed to exceed the cap limit. I'm not saying the Bruins haven't been cheapskates in the past, but that simply can't happen anymore in the post-lockout era. Every year the Bruins have spent up to the cap. In past 3 years the Bruins have signed Zdeno Chara and Marc Savard, both big name free agents. I assure you that Jeremy Jacobs has nothing to do with player personnel decisions. Jacobs is probably much more concerned with Delaware North opening another video slots casino in Pigsknuckle, Arkansas than he is about who is playing Right Wing on the second line. I'm not even sure he knows where TD Banknorth Garden is.

Despite not signing Hossa, the Bruins were able to get Michael Ryder (3 years, $4 M per). He certainly isn't Marian Hossa, but I think he will be able to help the B's next year. Did they overpay for Ryder? Probably, but the whole league overpaid for free agents this year. The Bruins were simply following the market trend. Ryder seems like a guy that desperately needed a change of scenery. Ryder is a year removed from back-to-back 30 goal seasons, but netted only 14 tallies this year with the Habs. Ryder was relegated to the fourth line at times this year and was a healthy scratch for much of the playoffs. The Bruins seem to think that he has the potential to return to his earlier form and provide the B's with a much needed scoring punch. Nobody has seen Michael Ryder play more than Bruins Head Coach Claude Julien. Ryder has played for Julien at almost every level. Julien was Ryder's coach in juniors with Hull (QMJHL), in the AHL with Hamilton, and in the NHL with Montreal. I would rather see them overpay for someone that they seemingly know everything about than a potential question mark. Plus, it gives Euro Trash wannabe Habs fans another reason to hate the Bruins. I don't think the Ryder deal is the type of deal that will make or break the Bruins season, but I do think that they are in much better shape than they were last year.

I'm certainly not saying that they should be getting the Duck Boats ready just yet or anything, but they should be much improved from last season. Remember that they played most of the '07-'08 season without arguably their best forward and the guy that was supposed to be their #1 between the pipes. On top of that they have added a physical winger with 30 goal potential. I think the Bruins are moving in the right direction with a solid nucleus of veteran talent and a talented group of young players waiting for their chance. I am excited about the direction the Bruins are going for the first time in years. It will be interesting to see what Peter Chiarelli and the Boston Bruins do in the next few weeks. I trust that they will make the right decisions and I don't think I have ever said that about a Bruins GM.