Apparently these are the type of numbers that get you a place on the 2008 AL All-Star team.

This wasn't a case of overzealous fans stuffing the ballot for their guys. It was the players who dropped the ball on this one. Maybe they thought that the Red Sox needed to be represented better at the Mid-Summer Classic and six representatives wasn't nearly enough.

Some would argue that Varitek is having the worst season offensively of any starting catcher in the American League.

Some will make the point that a player's defensive ability should also be considered when being selected to the All-Star team. Well, consider these numbers...

Of the 16 catchers in the AL with at least 380 innings caught, Varitek ranks...

Being selected to the All-Star team should be recognition for strong play in the first half of the season, not a reward for past seasons performance. In Varitek's case you would have to go back a few seasons to find All-Star caliber performance. Back to the pre-"C" era. Since being named Captain and signing for $10 M/yr, Varitek is hitting just .253.


Varitek possesses all the intangibles that help teams win ballgames. He was a big part of both the '04 and '07 World Series teams. He is one of the hardest workers in the game and is one of the great baseball minds of this generation. He has better game calling ability than probably any catcher in the league. You don't just happen to catch 4 no-hitters by blind luck. That being said, let's face the facts: Jason Varitek is a .264 lifetime hitter in the decline of his career. He is 18 points above the Mendoza line. He doesn't deserve to be an All-Star this year. 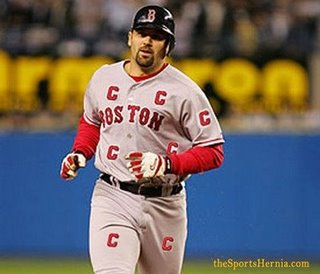