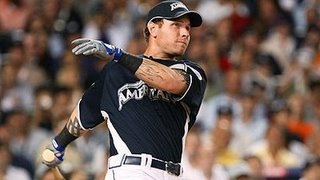 I know the live blog thing as been done to death. I admit it, I'm a complete hack.


We join this broadcast already in progress...


9:08
"It's like a Kiwanis Club in here" Rick Reilly's comment about the number of white guys in the Derby.


9:16
Braun's agent is throwing to him. You don't see Boras doing that.


9:28
Berman tells us that Hamilton blew his $4 million signing bonus on drugs


9:30
This has turned into an after school special. Don't do drugs kids, but if you do, make sure you can hit a curveball.


9:32
For some reason Edinson Volquez walks out and places a briefcase on home plate


9:35
When Hamilton was out of baseball he went to the batting cage occasionally


9:36
He got many of his tattoos while high. That explains it.


9:39
Police rough up some fans as they scramble for a ball


9:42
David Ortiz has seen enough and jokingly walks towards the exit and is booed by the classy fans of NY.


9:44
Hamilton ties Bobby Abreu's HR Derby record for a round with 24


9:46
The old man pitching takes a breather. Milton Bradley rubs him down.


9:48
Hamilton finishes with 28. Both teams gather around to congratulate him


9:50
We are going to need a Deep South translator to figure out what the 71 year old pitcher just said.


9:51
My dad just called me from his trip to Wyoming to talk about the HR Derby and to tell me that he was 3 feet away from a bison today.


9:58
Reggie Jackson is the special guest on the broadcast fresh off his appearance on every sports and celebrity blog on the internet. I'm going to go out on a limb and guess that he isn't rooting for Ryan Braun.


10:05
Reggie Jackson makes it through the interview without any inappropriate comments


10:14
ESPN guys force religion down the viewers' throats. "Hamilton was a cocaine and heroin addict and then he found God. It's a bad night to be an athesist."


10:22
Hamilton doesn't need to hit in the second round, but is still taking some hacks. Hamilton vs. Morneau in the finals

10:25
Hamilton decides he's warmed up and calls it quits for the second round.

10:27
Cal Ripken and Bookman the Library Cop from Seinfeld shelling for Holiday Inn


10:31
Some nonsense where some guy from Illinois picks a field and each player gets one swing to win him a car and baseball tickets. Both guys fail (probably on purpose)
10:39
Morneau wears #33 for Patrick Roy. I wish I knew this when I was writing my "10 reasons to hate the Twins" entry earlier.

10:47
1 HR, 4 Outs for Hamilton.
Berman: "He's lost that loving feeling"
10:50
3 HR 8 Outs....Yankee Stadium on it's collective feet as "Final Countdown" plays in the background
10:51
9 Outs
10:51
Hamilton finishes with 3 in the finals and loses to Morneau. MLB needs to change how the HR Derby works. Shouldn't the guy who hits the most home runs win?
10:53
Hamilton praises the lord, makes Erin Andrews nervous

11:02
Ozzie Guillen leads it off for the NL with Rollie Fingers on the hill for the AL. Fingers throws one pitch and is taken out by Manager Kenny Mayne and replaced by Goose Gossage.

11:05
Some guy named Justin Tuck. Apparently he plays for the New York Giants.

11:06
Chris Rock looks like Kenny Lofton in a baseball uni

11:07
First appearance by Erin Andrews who is looking good in a sun dress.

11:10
Wade Boggs is the early candidate for guy that is going to take this thing way too seriously

11:11
Billy Crystal in a game a little more his speed. Maybe his spring training experience will pay off ... nope

11:13
Spike Lee is in the game. Unfortunately Reggie Miller isn't there heckling him.

11:13
Emerson alum Maria Menounos grounds out. Menounos is the lone celeb wearing a B on her cap.

11:17
The deaf ball girl from Seinfeld reaches on a fielder's choice

11:19
Tim Raines is rocking a sweet old school Expos cap. He hits a towering 200 foot homer. Note: they put up a temporary fence that most of the ex-players could piss over.

11:22
Mike Golic stops the game for some reason

11:25
Mike Golic fouls out to the catcher and is heckled by his broadcast/life partner Mike Greenberg

11:28
Gary Thorne tells us that the wind is blowing out as if it matters

11:29
These things are lame and pathetic, but if I was a celebrity, I would definitely play.

11:30
James Denton hits a hard grounder at Wade Boggs who commits an error. He's OK but his extremely large ego is still bruised.

11:31
Chris Rock strikes out and is working on the Golden Sombrero

11:47
Just trying to clean up this blog. Nothing important happened.

11:48
Biggest absence this year: Jimmy Kimmel. Kimmel was a staple in this thing for years.

11:50
Kenny Mayne and Gary Thorne talk about hitting the OTB and betting on the ponies.

11:57
Wade Boggs is intentionally walked to get to Kenny Mayne who flies out to end it. NL wins 8-7