Let Manny be Manny somewhere else

Share All sharing options for: Let Manny be Manny somewhere else 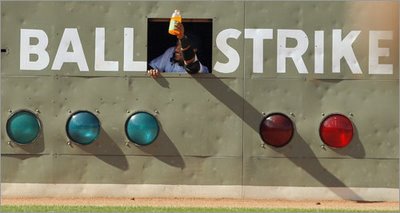 This year seemed different. Manny seemed like a new man. Manny seemed to genuinely care. He was running out groundballs, looking somewhat competent in the field, and actually talking to the media at times. It seemed like he was doing the whole contract year thing in hopes of getting the club option for 2009.

Then something flipped a switch in his Manny's dreadlocked head. He started getting into fights with teammates, pushing around senior citizens, faking injuries, and blasting the Red Sox organization. He wants out and he wants out now. This time it feels different than the all the other times that Manny has demanded to be traded. This time it seems like the real deal. The Red Sox organization has finally had enough and just wants him to go away. In all likelihood, Manny has punched his ticket out of town.

I think the writing is on the wall. It is time for the Boston Red Sox and Manny Ramirez to move on. If the Red Sox aren't able to move Manny Ramirez in the next few hours, we might see the biggest lack of effort since Derek Bell's "Operation Shutdown".

Red Sox will likely not be able to replace Manny's freakish ability to hit a baseball and will likely have to settle for 75 cents on the dollar at best. That is if they can find any takers at all. It will be difficult to find a team that can afford to take on Manny's lofty expiring contract.

The rumor right now is that the Red Sox are working on a 3-way deal involving the Pirates and Marlins that would send Jason Bay to the Red Sox and Manny Ramirez to Florida. I wouldn't mind seeing Jason Bay in a Red Sox uniform, but I seriously doubt the Marlins are going to take on the rest of Manny's $19 million contract. The Marlins' $21,811,500 payroll is roughly equal to Manny's contract, but the Marlins have been known to spend big on rent-a-players (see 1997 & 2003). The Fish are only 1.5 games back in the NL East and could be trying to buy another playoff run before the inevitable salary dump.

When Manny Ramirez flew out in the 8th inning last night, it may have been his last swing in a Red Sox uniform or this could just be another case of "Manny being Manny" at the trade deadline. This could just be his annual trade demand, which I believe falls somewhere between July 15 and July 31 each year depending on the lunar cycle. It is very possible that Manny Ramirez could still be a member of the Boston Red Sox at 4 p.m. ET and everyone will pretend it was no big deal and go on like nothing happened. You know, just "Manny being Manny". Stay tuned.