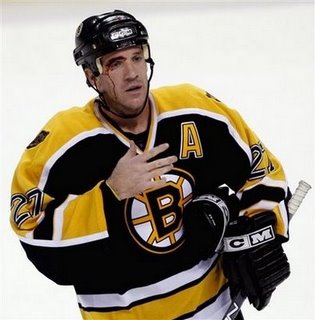 It appears that Glen Murray has pulled on the Spoked B sweater for the last time. The veteran winger was placed on unconditional waivers today by the Boston Bruins. If no team claims Murray, it is likely that the Bruins will buy out his contract to free up cap space.

After spending parts of 10 seasons in two separate stints with the Bruins, Murray departs the Hub of Hockey as the 14th highest goal scorer in franchise history.

Glen Murray is a natural sniper, who unfortunately lost a stride in an era when teams value speed. Murray is a class act and the consummate Bruin. I hope he can catch on with another team, but if this is the end of Murray's playing career, the Bruins organization should seriously consider bringing him on as a coach in their system.