Share All sharing options for: NHL drops the ball 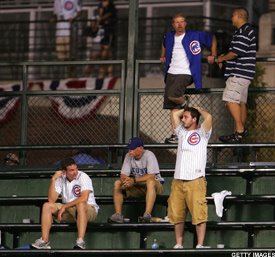 Break out the Old Style beer and your Clark Griswold Blackhawks jersey because the NHL is coming to Wrigley Field! The NHL announced last week that the Detroit Red Wings and the Chicago Blackhawks will face-off in next year's Winter Classic at Wrigley Field on New Year's Day.

I guess the NHL rewards lame duck franchises. The Blackhawks have struggled to draw fans in one of the largest markets in the league. Up until last year, the Blackhawks wouldn't show home games on television in an effort to draw more fans to Blackhawks games. Yes, it's that darn television machine that is ruining attendance. In 2004 ESPN named the Chicago Blackhawks one of "The Worst Franchises in Sports".

I would much rather see the Canadiens and Bruins play at Fenway, although my view may be slightly skewed. The B's and Habs first round series of this year's Stanley Cup Playoffs was one the most exciting series of the entire playoffs. The rivalry is definitely alive and well. Who wouldn't like to see Zdeno Chara and Georges Laraque drop the gloves in front the Green Monster?

A Montreal-Boston matchup could also fare better in the ratings. The game is competing directly against 3 college bowl games, two of which are scheduled to feature teams from the Big Ten. Why would the NHL choose two teams from the Midwest to play on the biggest college football day of the year? This makes no sense. Sometimes I think Gary Bettman was sent to the NHL by the NBA to secretly destroy the league.

Chances are that on January 1, 2009, I will be on my couch nursing a hangover watching the Red Wings and Blackhawks play pond hockey. It still beats the WhoGivesAShit.com Bowl.

Better throw on a couple Steve Bartman turtlenecks under that Griswold jersey, it could get cold out there.