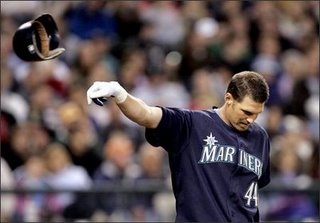 The Seattle Mariners announced today that they have released struggling slugger Richie Sexson. This comes as bad news to thrifty drinkers at Norm's Eatery & Ale House. The Seattle bar has a long running promotion called "Cheap 'Sexs on' Mondays", where from 4:00 to 7:00 all Budweiser and Bud Light bottles are priced according to Richie Sexson's current batting average (.220 = $2.20 etc.). Let's just say that folks in the Seattle area have been getting drunk on the cheap the past few seasons. I guess the kids in Seattle will just have to resort to PBR 40's in a paper bag (apparently another one of Norm's specials). This is not a happy hour for the people of Seattle.