Is the WNBA turning into the NHL?

Share All sharing options for: Is the WNBA turning into the NHL? 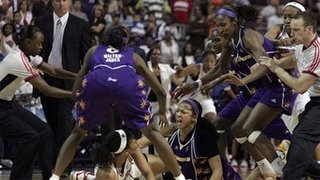 First they had players defecting to Russia, then they staged an outdoor game as a publicity stunt, and now there's fights in the WNBA. It's like the NHL with a better television contract.

Hopefully the league's next move is to hire Gary Bettman so he can destroy the WNBA once and for all (something that would have happened a long time along if it wasn't financed by the NBA).