Apparently the WNBA is way better than my blog

Share All sharing options for: Apparently the WNBA is way better than my blog 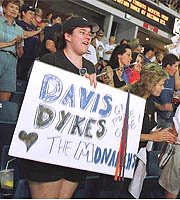 Yesterday afternoon I conducted a little experiment to see just how difficult it is to get 7,860 people to do anything, let alone go to a WNBA.

It turns out it is a lot more difficult than I thought. I failed. In fact, I failed miserably. The amount of traffic I drew to my site was more like the crowd at a girls JV basketball game than a WNBA game.

To quote the self-deprecating Tony Romo: I suck.

...but then again I didn't have David Stern and the NBA machine backing my effort.

I did however learn some valuable lessons from this experience:

1. The blogosphere doesn't like gimmicks as much as the fans of the LA Angels of Anaheim do.
I could have wrote a blog entry entitled "I'm pathetic, read my blog" and gotten the same result.

2. Friday afternoon at 4:00 might not be the best time to try to draw a record amount of traffic to your site.

3. Respect from other bloggers is very important
I just hope that this stunt didn't tarnish Stanley Cup of Chowder's reputation or damage any of the beneficial relationships I have formed with other bloggers in my short time as a member of the blogging community.

I have a new found respect for the WNBA. I will never make fun of the WNBA on this blog again (OK, that's a lie).

Some day I will be able to outdraw the WNBA, just not today. Watch out WNBA, I've got next!