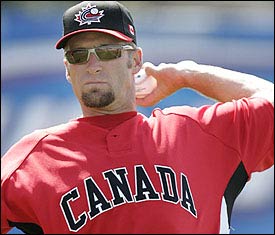 Here's one for the "Where are they now?" file.

It turns out that former Major League journeyman Rheal Cormier is pitching for the Canadian Olympic Baseball Team. At age 41, Cormier is the oldest athlete competing in the baseball competition of the 2008 Beijing Olympics. The lefty reliever prepared for the games by pitching for a amateur league team in Moncton, New Brunswick.

With Canada's team record at 1-3, it doesn't look like "Frenchy" and the Canadian Baseball Team is the answer to Canada's medal count woes.