I don't see the logic of Olympic basketball #'s

Share All sharing options for: I don't see the logic of Olympic basketball #'s 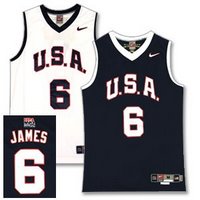 In the Olympics, basketball players are only allowed to wear jersey numbers 4 through 15. I guess the reasoning is that it makes it simpler for referees to signal to their partners and scorers, who often times don't speak the same language. I have heard that the reason why numbers 1, 2, and 3 aren't used is to eliminate confusion between the number of free throws upcoming and the number of the player charged with the foul. I guess that makes some sense, but don't you still have that same confusion when you call a foul on a player with a number containing the numerals 1-3 like #13?

If they really wanted to make it easy on the referees they would do what most high school and college leagues do and only allow players to wear numbers that contain the numerals 0 through 5. This system allows the ref to signal the player's number with one simple hand signal. Even a system that banned the numerals 1-3 would make more sense than the current system.

Maybe the IOC, FIBA, and the NBA are all just in cahoots to sell more jerseys.