The lesser known events of the Olympiad

Share All sharing options for: The lesser known events of the Olympiad 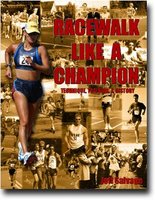 With the 2008 Summer Olympics in Beijing just a few days away, I thought I would bring you up to speed on some of the less popular Olympic events.

Racewalking
Faster than walking, but not quite jogging. I believe the sport originated in the late 1980's by elderly walkers trying to out run security guards in suburban shopping malls. Much like Dance Dance Revolution and air hockey it is impossible to look cool racewalking, even if you do bring home the gold.

Trampoline
Maybe one day your hyperactive 9 year-old neighbor will make it to the Olympics (or break his neck trying).

Modern Pentathlon
According to the Olympic website, Modern Pentathlon is "a complete sport, on the physical side - Swimming & Running are the basic disciplines; on the mental side – Shooting requires stress control and a precise technique; on the intellectual side – Fencing requires adaptability and intelligence; Riding an unknown horse requires a mix of adaptability, self-control and courage." Guns, swords, and unknown horses: I don't see where this could possibly go wrong.

Men's Field Hockey
I'm not sure if they have to wear the skirts or not.

Table Tennis
Not exactly the game you played down in the basement as a kid.

Competitive Sidewalk Spitting
This is a new event for the Beijing Olympics. The host country, China is currently the favorite to win both the men's and women's competitions.

These are the sports that we will follow closely and pretend we care about for the next few weeks and then forget all about them for another four years.