Share All sharing options for: My Top 5 BoSox Brawlers 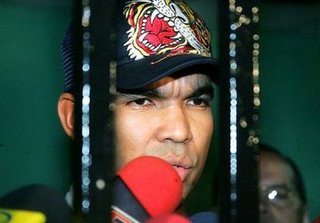 Rich Levine over at Comcast Sports Net's Wicked Good Sports wrote a piece on the Top Five BoSox Bar Brawlers of the Last 20 Years. Although he made some strong cases for the guys he picked, I think he made a few oversights. So, here is my list of the guys I would want on my side during a bar room brawl.

Ugueth Urbina
Ugueth will be playing the role of crazy unpredictable guy. This dude was bat shit crazy before he went to jail. Oh yeah, he also attacked 5 farm workers with a machete before trying to light them on fire. Nice guy.

David Wells
Levine had Wells on his list of guys he didn't want on his side, but I have to disagree. Wells looks like a guy that has seen his fair share of bar fights over the years. The bar brawl is definitely a situation where you want a seasoned veteran involved.

Mo Vaughn
I chose Mo simply because the opposition could easily mistake him for a bouncer.

Mark Whiten
It's probably not a great idea to mess with anyone with the nickname Hard Hittin'.


The Guys I Wouldn't Want on My Side

Craig Grebeck
There is just no room for a guy with the nickname "The Little Hurt" in a bar brawl.