Where do B's fans rank?

Share All sharing options for: Where do B's fans rank? 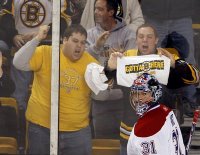 Derek Felska from The State of Hockey News recently ranked the best and worst fan bases in hockey. So where did the Bruins faithful end up on the list?

Felska ranked B's fans #22 in the NHL. According to Felska, the Bruins have the worst fans of any of the Original 6 franchises. Blackhawks fans narrowly edged out the Bruins fans for the #21 spot, presumably because all the fair weather Hawks fans have come out of woodwork now that they get to watch their team from the bleachers in Wrigley. Boston's fan base was able to just barely sneak ahead of the Nashville Predators, who play in a city where most people think "hockey" is an Islamic terrorist group.

This is Felska's take on Boston Bruins fans:

This might be another surprise but Boston ranked 26th in the NHL in attendance this season despite making the playoffs for the first time in two years. When your team sits in America’s best sports city the last few years with the World Championship Boston Red Sox, Celtics and pretty damn good football team in the New England Patriots its easy to see why Bostonians may have forgotten about its hockey team who hasn’t won a championship since Bobby Orr played for the team in the early 1970’s. Yet to watch a Bruins game on TV, the fans are knowledgeable bunch who live in a traditional hockey market but too many times fail to show up to root for their hometown team in TD Banknorth Garden. Online the Bruins do not have a large showing either so even though the area has a fair amount of hockey tradition it remains a very small niche on such a large sports scene that really is enjoying a lot of success in places not on the ice. One interesting question to ask a Bruins fan is, if they did win the Stanley Cup would the papers stop talking about the Red Sox long enough to take note of it? Or would the Bruins still get relegated to the 2nd page if David Ortiz gets a hangnail?"