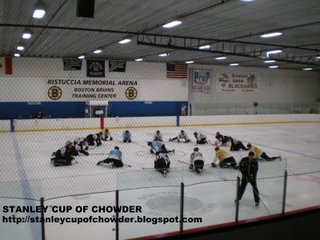 I just got back from Wilmington where I took in the first day of Bruins Rookie Camp. Everyone was on the ice except for G Adam Courchaine (groin), D Scott Fletcher, and LW Jeff LoVecchio (post concussion syndromes).

Here were the lines / jersey colors for this afternoon:

12:40
It's really dark, quiet, and cold inside the rink right now as the zamboni finishes cleaning the ice.

12:42
The zamboni leaves the ice and a few more fans start to trickle in.

12:50
Levi Nelson is the first man on the ice (No, he isn't the kid who knocked up Bristol Palin). Peter Chiarelli and Claude Julien are taking in practice from the far corner of the rink.

1:35
Zach Hamill inadvertently takes someone down from behind (I think it was Denis Reul)

1:43
1 on 1 corner drill
The boys are starting to show a little bit of physical play. No full body checks yet, but lots of bumping and battling for position.

1:48
Zamboni comes out and the boys head back into the dressing room for a few. Most of the fans leave at this point. I'm guessing a few snuck in on lunch break. Trust me, they missed a lot.

2:06
Second half of practice starts with a drill that is 2 on 0 and turns into a 2 man breakout. Blake Wheeler beats Kevin Regan top shelf which gets an audible "Hey-Oh!" from an unindentified player or coach.

2:13
7-man 3 vs.2 drill (one forward line that goes up against one set of defensemen at each end of the rink)

2:22
2 on 3 corner drill
Lots of physical play. The pace of play and intensity has definitely picked up in the second half of practice.

2:33
Matt Marquardt tosses a puck over the glass to a young fan

2:41
Brad Marchand and Jordan Knackstedt exchanged a few shoves and cross checks away from the play. The gloves came off and they exchanged a few punches before things quickly calmed down (see photo below). 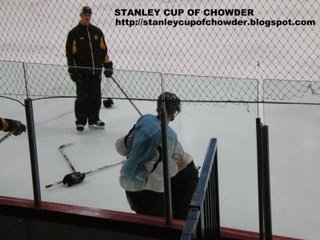 2:54
Crazy drill where two players race to a puck at center ice and then play 1 on 1, then another 2 players enter the game and battle for another puck at center. At times 3 simultaneous games of 1 on 1 were going on at the same time.

2:58
Hamil vs. Cheremetiev
Hamill looks like he is skating by himself out there.

2:58
Wacey Rabbit leads the rookies in a team stretch. It looks like practice is over and Cheremtiev probably couldn't be happier about that.