Don't forget to get your permission slips signed kids...

Share All sharing options for: Don't forget to get your permission slips signed kids... 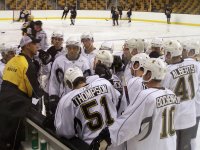 Don't forget to get your permission slips signed kids. It's almost time for camp.

The Bruins are two weeks away from opening up training camp. The B's will begin camp on Friday, September 19th at the TD Banknorth Garden. I will try to make it out to one of the public sessions and report back for Stanley Cup of Chowder. I didn't submit my application for a press pass, so I won't be able to live blog like I would like to, but I will try to fill you in on what is going on and take a few pictures.

UPDATE (6:19 PM): The Bruins will hold rookies practice and optional ice time for veterans on September 19th in Wilmington NOT at the Garden. They will be at the Garden on the 20th and 21st. The Bruins website has the official training camp schedule and roster.