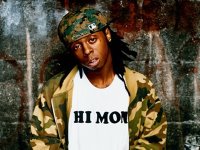 Apparently rapper/facial tattoo enthusiast Lil Wayne has his own blog for ESPN. In Lil Wayne's first blog entry, he tells us about his seemly random assortment of favorite sports teams:


"Besides the Packers, my favorite teams are the Red Sox, the Lakers and the Boston Bruins."


Although, I think he may have thrown in the B's so he wouldn't look like a complete front runner.


He also confesses his love for tennis:


"I also love tennis. I had a lot of people over to my place to watch the Wimbledon final this year, and we went crazy."


I think I would pay money to watch a video of one of Lil Wayne's tennis parties.


Who knew that Lil Wayne was such a renaissance man?
H/T to Barstool Sports