Straight from the zebra's mouth

Share All sharing options for: Straight from the zebra's mouth 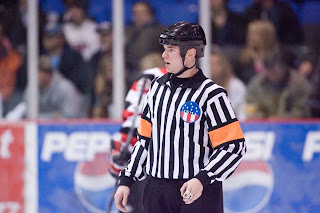 I recently caught up with CHL referee and former college classmate of mine, Tom Steinel. Steinel has spent time as an official in the Eastern Junior Hockey League, NCAA D-I (Atlantic Hockey), North American Hockey League, United States Hockey League, and Central Hockey League. This summer, Tom attended the NHL Prospects Camp. The New Jersey native is embarking on his first full season in pro hockey as a referee in the CHL.

Some think that the NHL's instigator rule encourages dirty play and makes players less accountable for their actions on the ice. What are your thoughts on the instigator rule and do you think the NHL should abolish it?

I would have to disagree with this statement. The NHL has the instigator rule in place to discourage dirty play. Any player or goalkeeper who instigates a fight receives additional time penalties as well as fines and suspensions. Same as being an aggressor of a fight. So no, I do not see the instigator rule being abolished and the only changes if there were to be any made would be to increase the penalties accompanied with the instigator rule.

One thing that has always bothered me is the double minor high-sticking call. It seems to only encourage players to bite their lips to draw blood and the extra 2 minutes. It seems unfair to tag a guy at a crucial time with a 4 minute penalty because his inadvertent high stick drew blood. Do think this rule has made players more careful with their sticks?

The rule for issuing a double minor penalty for high sticking does not require the drawing of blood but the action resulting in an injury. In other words a "shaving nic" that someone may get shaving in the morning does not mean the person is necessarily injured. Giving a player a double minor penalty at a crucial time of the game whether it seems unfair or not, inadvertent or not has to be called. The responsibility must still remain on the player to be in control of his stick.

Do you think the NHL will ever go to a no touch icing rule?

It’s tough to say, the NHL is putting more emphasis on calling penalties when there is unnecessary or dangerous contact between the players this year and hopefully that will quiet some critics of touch icing. I, myself, am a supporter of the rule, with the game moving forward in rewarding speed and skill I feel this I one rule that can possibly showcase the speed of an attacking forward over that of the defenseman.

Overall, do you think that the post-lockout rule changes have made for a better game?

No question. The game has gotten so much faster, it’s great to be able to see just how skilled these players really are when they have the ability to skate unobstructed.

I believe you spent some time as a linesman. Did you ever catch a wayward fist while trying to break up a fight?

I did spend some time as a linesman, and as all officials, not just linesmen, can attest there are many bumps & bruises that come with the job. So yes, I have caught a wayward fist once or twice.

There really isn’t one particular game that sticks out. However, if things do seem like they are getting away from you, you just have to stick to your guns and continue to call penalties especially the aggressive & retaliation ones.

What are the travel and hotel accommodations like working games at the major junior and lower minor league levels?

Travel working junior hockey is grueling at times, you spend a lot of time alone driving from city to city. If you do get flights the times are usually very off peak and sometimes several segments. Like any job though as you move up things do get better. Working in the minors now we travel more as crews to and from the games themselves, and there is much less driving. Hotels follow the same progression, from staying at low end hotels in the middle of nowhere to staying at better accommodations as you progress. We used to joke about the movie "Vacancy" (a movie about a pretty shady hotel off practically a dirt road) was where we had the most points from all our nights spent there.

Working as a hockey official has taken you to some places you probably would not have traveled to otherwise. What have been some of your favorite places that you've traveled to?

Your right my job has taken me to places I never thought I would ever see. I have been fortunate to live in many different areas of the country including Massachusetts, Montana, Iowa, Minnesota, & Texas so far. A few of my favorite places have been Alaska, Mount Rushmore (Rapid City, SD) & the St Louis Arch (St. Louis, MO).

What advice would you give to a young amateur referee who is thinking about making officiating a profession?

Anyone wishing to pursue this as a career has to keep a few things in mind. One is to work as many games as possible. Experience makes up a lot of what we do. The other is to listen, be a sponge. When older veteran officials give advice or pointers, listen!

At the NHL level, the vast majority of the on-ice officials are Canadian. Do you see more American-born officials breaking into the league in the near future (I know you are hoping for at least one American guy to make it to the NHL)? What does the future of American officiating look like?

I think the US has a very strong class of officials coming up at the right time in the next 3-4 years. I am fortunate to be following the same proven road of already established NHL officials (Chris Rooney, Ian Walsh, & Chris Ciamaga) and can only hope my outcome can be as good as theirs.

You will be starting your first full season in the CHL in a few weeks. I can't say I know a ton about the CHL. Most of what I know I learned from reading Jason Cohen's Zamboni Rodeo. The CHL is comprised of what you would call "non-traditional hockey markets". Do you think you will have any problems with fans that don't understand the rules and nuances of the game of hockey?

One thing I have learned traveling the country and working games is to never under estimate the people. I have been to "non-traditional hockey markets" before and have been pleasantly surprised at the passion & knowledge of the game that the fans there had. I had only a few games in the CHL last season and the same proves true for the CHL. I can’t see how 15,000 fans in Oklahoma City or 7,000-8,000 in Tulsa or Wichita or Laredo is something to be put on the problem list.

Phil Kessel's brother Blake played in the USHL during the same time that you were working in the league. Can you describe Blake Kessel's game? Does he have what is takes to get to the NHL and what can UNH fans expect from him?

Blake was a good tough defenseman whose size and strength will be something that will help him transition into college hockey. He was an All-Star and top defenseman in Waterloo and should excite the UNH faithful.

Last year the Bruins drafted defenseman Tommy Cross, who will be playing his college hockey at BC. Cross played last season with the Ohio Blue Jackets of the USHL. If Cross ever makes it to the NHL with the B's, what can Bruins fans expect from his game?

Tommy like Blake was a solid, big defenseman who was tough in the corners and in front of the net. He will be a nice addition to BC & hopefully for Bruins fans as well in the not too distant future.

Thanks Tom for taking the time to answer my questions. It's great to get an insider's prospective on the game of hockey. Good luck with the upcoming season!