Ward doesn't expect to wear "A"

Share All sharing options for: Ward doesn't expect to wear "A" 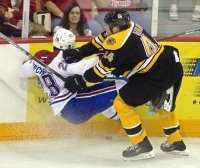 In the wake of Glen Murray's departure from the Hub of Hockey, some wondered if veteran defenseman Aaron Ward would be named as an alternate captain. During an interview with Toucher & Rich on WBCN, Ward indicated that he would be very surprised if he was chosen to wear the "A" this season. Ward thinks that a younger veteran would be a better choice as alternate captain.