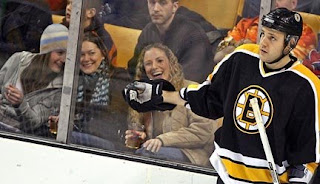 Much to the disappointment of the young ladies in the picture above, Andrew Alberts will no longer be wearing the spoked-B. The defenseman, who has been a healthy scratch for the first two games, has been traded to the Philadelphia Flyers for 22 year-old winger Ned Lukacevic and a conditional 3rd or 4th round pick in 2009 (if Alberts resigns with Philly, the B's get the 3rd round pick).

Lukacevic is in his second year of professional hockey and has not played at the NHL level. New England hockey fans may remember him from his time with the Manchester Monarchs. Hockey's Future describes the Serbian winger as having "a mid-sized, thick body with good legs generating nice speed and balance on his skates. Natural scoring ability that continues to develop with an above average set of wrists. Productive at a young age but is developing more into a high-energy defensive specialist. "

Alberts joins a Flyers team that was in desperate need of another defenseman after Derrian Hatcher, Randy Jones, and Ryan Parent all went down with injuries. Alberts will most likely be remembered in Boston for the hit he took from new teammate Scott Hartnell that knocked him out for most of last year and his hard-hitting interview with Patman on Toucher & Rich.

This seems like a move to free up cap space. Alberts was making $1.4 million this season with a cap hit of $1.25 million. The Bruins were really in the market for a puck-moving defenseman, not a depth winger. I wouldn't be surprised if another move is coming. Stay tuned.