Bruins head out west to take on Edmonton

Share All sharing options for: Bruins head out west to take on Edmonton 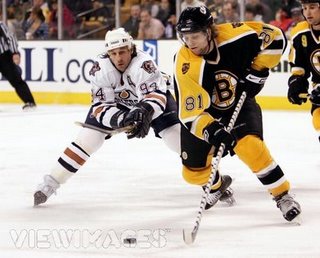 The Bruins are back on the road again. This time for a three game Western Canada trip which has the B's playing the Oilers, Canucks, and Flames. The B's are looking to get the trip off to a good start tonight when they take on the Edmonton Oilers at Rexall Place.

Oilers Trivia
Oilers Head Coach Craig MacTavish is the last man in the NHL to play without a helmet.

Things to look for tonight:

- Will Michael Ryder stay on the 4th line and how will he react to the demotion?

- Milan Lucic's game will come back down to Earth and we can all stop with the Cam Neely comparisons. If the B's can get some offense from him, that's great but I'm happy with him just being a human wrecking ball.

- I know I have probably written this every game, but the PK needs to play better. Edmonton has the 10th best power play in the league (20%)

- One thing the B's have done well with this year is getting pucks to the net. The B's are 10th in the league in shots per game (30.9). The B's should continue to fire pucks in quantity tonight and challenge the Oilers goaltender. Oilers starter Mathieu Garon is 22nd in the National Hockey League in save percentage (.897).

- I would expect Tim Thomas to get the start in goal tonight.