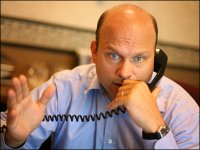 The rumors about a possible preseason trade involving the Bruins are starting to circulate. Ideally, the Bruins would like to free up some cap space and obtain a puck-moving defenseman. The Herald is reporting that a blockbuster deal could be in the works involving Marc Savard, who has a no-trade clause. I find the Savard scenario highly unlikely. The Bruins have invested a lot to get Michael Ryder in the off-season. Ryder seems like the type of goal scorer who needs someone to get him the puck, much like Glen Murray was. Savard is definitely the guy that has been penciled in to get Ryder the puck this season. Trading away Savard at this point doesn't seem to make much sense. Think back to the 2005-2006 season and how much Glen Murray struggled once Joe Thornton left town (Murray had 12 goals in 22 games before the Thornton deal and only 12 goals for the remainder of the season). The Bruins appear to be committed to the Ryder/Savard combo. Savard and Ryder haven't seemed to completely click on the ice so far, but these things take time. Maybe those "team-building activities" in Vermont have helped the duo get on the same page. It doesn't make sense for a team that ranked 24th in the NHL in goal scoring to trade away the one guy that has a proven track record of being able to create offense.