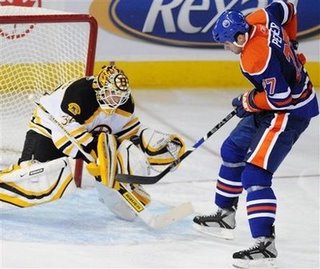 Dennis Wideman potted his second goal of the season to lift the B's over the Oilers in an OT thriller. Tim Thomas shut down the Oilers and earned his first shutout of the season while turning aside 27 shots. The B's improved to 4-2-3 with the win.

- The B's continued to throw a lot of shots on net again last night(36 shots). This is something that the Bruins really struggled with at times last season. The Bruins are currently 9th in the league in shots per game (31.4), compared to 20th last year (28.5)

- Marco Strum's holding penalty at the end of the first period was the definition of a bad penalty.

- Does anyone else think the Oilers throwback unis are hideous?

- The B's power play did a great job of stretching out the Oilers 3 man PK in overtime. The Oilers all collapsed on the puck down low which left Wideman wide open for the game-winner from the top of the circle.