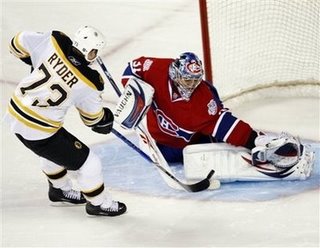 The Bruins fell behind 3-0 in the first period, but managed to battle back to tie things at 3-3 late in the third period. The Habs prevailed in the shootout, but the B's still walked away from the Bell Centre with a point.

- Good heavyweight bout between Shawn Thornton and Georges Laraque (video below; WARNING: Jack Edwards still turns into a 10 year old spaz on a sugar high every time the gloves are dropped)

- Marc Savard is tied for the league lead in goals and looking more like a sniper than a playmaker (2 G last night, 5-1-6 even +/- on the year)

- Phil Kessel recorded his first hit of the year, which puts him on pace for 27 hits this year. Frail Kessel only recorded 11 hits in 82 games last season. I know physical play isn't really what is expected of him, but 11 hits in 82 games! Someone needs to tell him that the NHL isn't a no-check house league.

- Savard's goal with 48 seconds left in the third was the definition of puck luck.

- The puck was taking some weird bounces off those endboards.

- Wideman took a dumb penalty in the first period. The leg lock was a bitch move by Andrei Kostitsyn, but the $3.875 million dollar man has to have better discipline than to blatantly cross check a guy in retaliation right in front of the official.

- Besides giving up the shorty in the first period, the power play looked better. They seemed to be moving the puck much better and doing a good job of finding the seams.

- Tim Thomas made some big saves late to keep them in it.

- Ryder had a chance to be the hero in the shootout...but it wasn't meant to be.

- You have to be impressed by the way the B's battled back. They will take points in Montreal anyway they can get them.