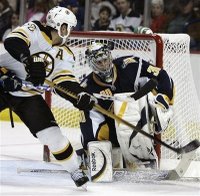 The Bruins lost in the shootout for the second consecutive night. Dennis Wideman and Phil Kessel were the goal scorers for the B's. Manny Fernandez turned in 28 saves in the loss. The B's are now 2-1-3 on the season.

- The B's are about as good in shootouts as Alexander Hamilton was. Bruins shooters are 2 for 13 in the shootout this season.

- Tonight's game was on Versus, which was a nice break from Jack Edwards' hyperventilating and over-emphasis on the H in "Wheeler".

- The only issue I had with the Versus in-game announcers was when they referred to Dennis Wideman as "one of the top defensemen in the NHL". I'm going to have to disagree with that statement, especially on the defensive aspects of his game.

- Drew Stafford's goal was reminiscent of the scoring trick in Wayne Gretzky and the NHLPA All-Stars. You could always score by skating in an L pattern in front of the net. I was more of a fan of the NHL series, but Wayne Gretzky did feature the always fun Intimidate Button.

- The B's power play was able to swipe the V-Card of the Buffalo PK.