Share All sharing options for: B's look for first home victory vs. Atlanta 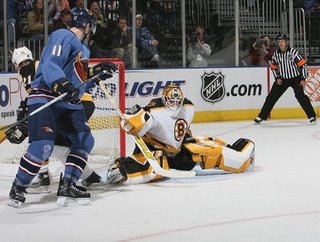 The Bruins are back at it tonight when they host the Atlanta Thrashers. The B's are looking to snap a three game losing streak and earn their first home victory of the season.

Just who are these Thrashers?
Atlanta Thrashers 2-3-2; 6 pts (4th in Southeast)

Bruins/New England Connections
- Ron Hainsey is a Bolton, CT native who played his college hockey at UMass Lowell
- Marc Savard & Shane Hnidy have both spent time with the Thrashers
- Former Bruin and BC Eagle, Marty Reasoner is on the Thrashers roster
- Eric Perrin played his college hockey at UVM
- Mike Hoffman is a Weymouth, MA native who played for UConn
- Rookie defenseman Zach Bogosian played for Cushing Academy
- Mark Stuart's brother Colin pays for the Chicago Wolves, the AHL affiliate of the Thrashers.

Thrashers Trivia
According the always reliable Wikipedia, "The nickname "Thrashers", after Georgia's state bird, the brown thrasher, was selected from a fan poll."

Things to look for tonight:

- Will tonight be the night that Iyla Kovalchuk breaks out?

- Can the B's improve their 29th ranked PK against the Thrashers struggling PP?

- The Thrashers give up more shots than any other team in the league (36.7 shots allowed per game).

- Who gets the start in goal for the B's? Julien has alternated between Thomas and Fernandez so far this season, but the coach has said that systematically alternating goaltenders is not the system that he plans to go with throughout the season. Fernandez is 4-0-0 with a 1.16 GAA lifetime against the Thrashers.

- Can the B's do a better job of getting in front of the net and drawing penalties? The Bruins are ranked 23rd in PP opportunities with 28 times with the on the power play.

Hmmm, where have I heard these things before?:


At least the B's spend to the cap. Even though they use that as an excuse to gouge fans on ticket prices.