Share All sharing options for: B's look to extend win streak to 3 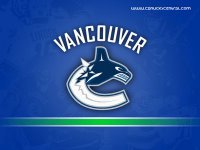 The Bruins will look for their third straight win tonight when they visit the Vancouver Canucks at GM Place. Tim Thomas and the Boston Bruins were able to shutout the Oilers last night 1-0 in Edmonton. The B's hope that they can carry the momentum from last night's win with them to Vancouver. The Canucks have not lost yet on home ice (2-0).

Just who are these Canucks you speak of?
Vancouver Canucks 4-4-0; 8 pts (5th in Northwest)

Guys Who Like to Drop the Gloves
The Canucks have 11 fighting majors on the year from 9 different players. The Bruins have only had 2 fights this year, both involving Shawn Thornton.

Canucks Trivia
Despite being named team captain, Canucks goalie Roberto Luongo is not allowed to wear the captain's "C". According to NHL rules the "C" must be worn by a skater.

Things to look for tonight

- A lot of Milan Lucic jerseys inside GM Place

- With road games on back-to-back nights, will Claude Julien go with Manny Fernandez, who has more experience versus the Western Conference or stay with the red hot Tim Thomas?

- Will the Vancouver power play that went 4 for 6 on the man advantage last game against Edmonton be too much for the B's?

- Can the B's overcome the fatigue of playing back-to-back road games?

- How many times will Jack Edwards say "down the river"?


Can someone tell me why this guy sounds like Kevin Costner trying to do a Boston accent in JFK? Is this really how people from Southern B.C. talk?