Share All sharing options for: "Come on dinosaur, let the kids play!" 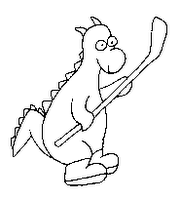 Comcast is doing a free preview of NHL Center Ice this week, so I have been able to watch some teams that I don't normally get to see. Once I finished watching the Red Sox shit the proverbial bed against some team from St. Petersberg, FL, I switched over to one of the Center Ice channels to catch the end of the Blackhawks-Predators game.

Apparently the Hawks' disappointing start to the season has some on the team a little frustrated. Some are even taking out their frustrations on their opponents. Comcast SportsNet Chicago was covering the game and had Blackhawks winger Adam Burish mic'd up for last night's game. At one point there was a scrum in front of the net and a few words were exchanged between the 25 year-old Burish and 35 year-old journeyman Greg de Vries of the Predators. The mic was able to pick up this instant classic from Burish (or something similar):

I've been searching all morning for the video, but can't seem to find it. If anyone tracks it down, let me know.