Corsi Numbers: The Good, The Bad, & The Mediocre Pt. 2

Share All sharing options for: Corsi Numbers: The Good, The Bad, & The Mediocre Pt. 2 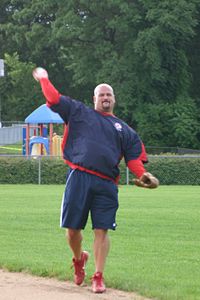 If you asked me a few weeks ago about Corsi Numbers, I would probably say about a .500 lifetime win percentage and an ERA somewhere in the mid to low 3's. It turns out Corsi Numbers aren't a reflection of Jim Corsi's pitching prowess, but rather a metric developed by Buffalo Sabres goaltending coach Jim Corsi (not the man pictured above). In case you missed it, last week I schooled my readers on how to compute Corsi Numbers.

Ten games into the season, this is how the Bruins Corsi Numbers look:

Yelle, Krejci, and Ward are the only Bruins with negative ratings. It should be noted that all shots directed towards goal (including blocked shots) count towards the Corsi Number. Aaron Ward currently leads the team with 26 blocked shots.