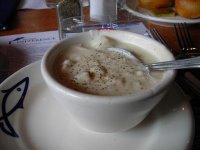 Serving up the best links of the week from all across the newfangled interwebs:

The worst sports fan tattoos ever, including a butchered rendition of Pat the Patriot [gibbs12 found via SportsbyBrooks]

Steve Dangle, the kid that did the awesome Mats Sundin at the drive thru video and the NHL team previews on YouTube has a new website [Hockeytube]

Gabe from The Jumbotron apparently is not a big fan of BU alum Freddy Meyer or the Michael Ryder signing, but he loves burritos, replica jerseys of third line centers, Bobby Higginson, and the Detroit Tigers [The Jumbotron]

Could the New York Islanders bail out the U.S. economy? [Melt Your Face Off]