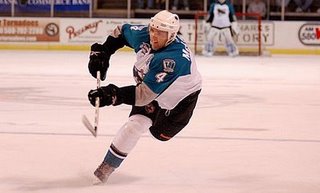 I normally try to avoid Central Mass like the plague but now that a few of my friends from college live in Worcester, I find myself spending a lot of time in the Dirty Woo. Last night we decided to check out a Worcester Sharks game at the DCU Center, New England's premier venue for monster truck rallies, professional bull riding, and third rate musical acts.

This was the first time I had been to the DCU Center since my failed job interview with the Sharks a few years ago when the team first relocated to Worcester. Judging by the sea of empty seats inside the DCU, whoever got the job is doing a bang up job. The announced attendance for the game was 3,612 but I would estimate the actual attendance to be about a third of that. We were able to walk up about 10 or 15 minutes before the puck dropped and get seats in about the 10th row at center ice. Since we were right at the red line, our view was only occasionally obstructed by the little shit machine in front of us waving a foam shark fin.

After we grabbed some dogs and beers, we headed to our seats. As we were settling in, my buddy Kevin told us about the time that his now ex-girlfriend once dragged him to see Disney on Ice at the DCU. Kev did what any red blooded 20-something would do at a family friendly event, he started drinking...heavily (much to the chagrin of appalled parents).

The National Anthem was a Jimi Hendrix style guitar rendition performed by a guy who looked like he was no stranger to fishbowling his Geo Metro. I would have liked to have seen him shred a little "Oh, Canada", but unfortunately the visiting Bridgeport Sound Tigers hail from the lower 48.

The Sharks were rocking their new third jerseys for the first time last night. They are grey with the old school lace up thing that everyone is wearing now with "SHARKS" written diagonally across the chest (think Mystery, Alaska). The Sharks new sweaters are almost as drab as the arena they play in. I don't know what it is about that building, but it just has that dark, dingy airplane hanger feel to it. Maybe it's the lighting or the sea of empty beige colored seats.

Hey, it's Kyle McLaren and the San Jose Sharks $2.5 million salary cap dump! We decided that if we were in McLaren's situation and trapped in Worcester for the year, we would just start showing up to games half in the bag.

McLaren looks like the old guy on your beer league team that just coasts his way through his shifts. You know, the guy that is about 10 years too old to still be productive on the ice but he brings a case of beer every week so you keep him on the roster. McLaren is wearing #4 for the Woo Sharks, but I think he should be forced to wear 2.5 as a constant reminder of why he is there. The odds that we see Kyle after the game at the bar hitting on local skanks is set at 2-1.

The Sharks, like most minor league teams, feature lots of cheesy in-game entertainment and promotions. My favorites were the super awkward green screen video of Sharks' forward Riley Armstrong bobbing his head with with a clip of "Night at The Roxbury" playing in the background and the Critter Control "Pesty Behavior Play of the Game", which last night was just some guy inadvertently bumping into someone after the whistle.

The best intermission entertainment ever is when they let little kids play a short hockey game. There are always at least 8 kids on the ice at a time for each team and there is always one overgrown kid that ends up knocking kids over. The Woo Sharks let the kids play during the first intermission. Naturally, we gambled on it. I took the Blue team. The Blue team looked sharp at both ends of the ice but couldn't seem to put the puck in the net. The Blue goalie looked like a pint-sized Patrick Roy. The game ended in a 0-0 tie, so no cash was exchanged. I blame the Blue team's coach. He had one very poorly timed shift change that cost them the win in my opinion. The sad thing is this game was 10 times more exciting than the actual game. FINZ, the Sharks super creepy looking mascot served as referee for the game. I wouldn't put it past that slippery bastard to take a bribe from the White team. We all know that Blades likes the hooch, but FINZ may also like to imbibe. 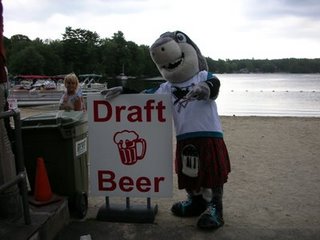 As for the actual hockey game, it was pretty uneventful. The Sharks put 33 shots on net but didn't really have a whole lot of quality scoring chances. The Sharks seemed flat all night. I don't know if it was because they played on back to back nights or if they all pre-gamed in McLaren's hotel room, but the team seemed to lack intensity. At one point, Blake Comeau blatantly drove one of the Sharks from behind head first into the endboards. Not one guy on the Sharks stood up for their teammate. I was hoping to at least see a decent fight. Entering last night's game, the Sharks had 9 fighting majors in 5 games. I think this is the first AHL game I have ever been to where there wasn't a fight. Isn't that what the AHL is all about? The Sharks did finally start to throw some hits late in the 3rd, but it was too little too late. The Sound Tigers prevailed 2-0. I was expecting more out of the game, but nothing good has ever come out of Worcester, MA. Trust me, I was born there. Let's go to the bar.
We walked two blocks in the rain to Irish Times only to find the doors locked and the lights off. It turns out the owners of the bar couldn't pay the mortgage on the building. So, we decided to take a cab to another bar.
We got in a cab that reeked of cologne. I think the young gentleman driving may have tried to cover up some sort of funk in this cab. Maybe he was driving around with the dude that shredded "The Star Spangled Banner" on his Fender Strat. I would have gone with new car smell but this guy opted for Drakkar. At any rate, we decided to go to Jillian's.

Jillian's was showing the UFC fights which means a $7 cover charge and a crowd consisting primarily of douche bags with chinstrap beards and tribal tattoos and their overweight girlfriends, but unfortunately no sign of Kyle McLaren. We ended up staying there and shooting some pool and watching the UFC fights. I was surprised to learn that Michael Buffer's less talented brother Bruce does the ring announcing for UFC. One other note on UFC: you could not pay me enough to put a "Condom Depot" ad across my ass. 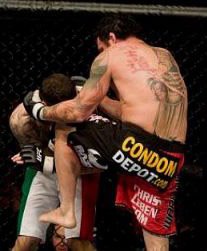 They were giving away some free Captain Morgan's swag at the bar. I got a key chain and a t-shirt. I wonder if Zdeno Chara has ever used the line "Do you want a little captain in you?"?

Well, that was my night in the Woo. Wasn't that better than a formulated B's recap? I would like to make this a reoccurring feature on Stanley Cup of Chowder. I just need to find a way to drag my friends to college and AHL games.