Things Christopher Columbus would be shocked to discover

Share All sharing options for: Things Christopher Columbus would be shocked to discover 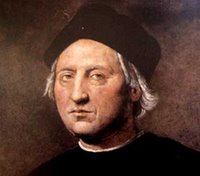 - He has a second-rate city named after him with a mediocre hockey team and a soccer team with the most latent homosexual logo in pro sports.

- Not all Native Americans were wiped out by disease

- His mistake is celebrated each year by millions of Americans by getting drunk and watching football all weekend.

- Water travel has changed a lot since his day

- Small children are being encouraged to stick their hands near stingrays

- He discovered "The land of Shortstops"

- A 42 year-old man with a regular season ERA of 5.66, who was left off the Division Series roster was chosen to pitch the most crucial inning of the post season! That is one mistake few outside of Tampa Bay will be celebrating.