Share All sharing options for: Bruins return to action after 4 day hibernation 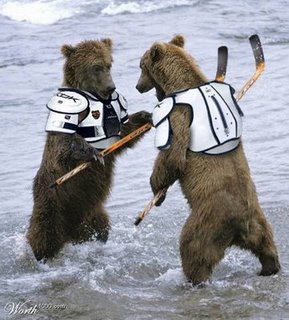 Sorry for the lack of posts around here lately. Between my meaningless quest for blogging glory and a Halloween weekend filled with casinos, costumes, candy, and Captain Morgan, I haven't gotten around to writing about the B's. Well, that changes right now. Here is another one of my formulated and predictable game previews that you have come to expect from me.

After 4 days of rest following Saturday night's 5-1 win over the Charlestown Chiefs Dallas Stars, the Boston Bruins are set to play host to the somewhat surprisingly competitive Toronto Maple Leafs. The Leafs enter tonight's game 4-2-1 in their last 7 games after starting the season 1-2-3. This is an important early season game for both teams, as only one point separates the two teams in the Northeast Division standings.

Just who are these Maple Leafs you speak of?
Toronto Maple Leafs 5-4-4; 19 points (4th in Northeast)

Maple Leafs Trivia
There are many theories about the origin of the Maple Leafs name. One theory according to the always reliable Wikipedia is "The Maple Leafs say that the name was chosen in honour of the Maple Leaf Regiment from World War I. As the regiment is a proper noun, its plural is formed by adding a simple 's' creating Maple Leafs (not *Maple Leaves)." Nice try, but you're still not invited to the grammar rodeo.

Things to look for tonight?

- How will the B's respond after 4 days rest at home?

- Will the intensity from Saturday's game carry over into tonight's game?

- Tonight is the first ever Sam Adams Bru Fest. Could showers be in the forecast on the balcony tonight?

- "Sheriff" Shane Hnidy did not practice yesterday (undisclosed) and is expected to be out of the lineup tonight. Matt Hunwick will likely take his place.

- We could see a few power play goals tonight. Both teams have struggled on the PK (Boston: #30, Toronto: #24), but have seen some success with the man advantage.

My favorite Canadian duo since Bob and Doug McKenzie give you a preview of tonight's game:


I wonder how long they spent searching for Ted Williams' frozen head before realizing it was 2,700 miles away in a lab in the middle of the Arizona desert?