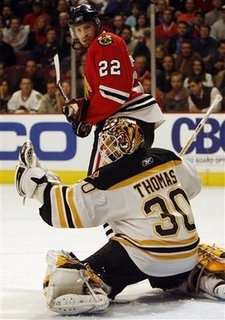 The Bruins got their first shootout victory of the season and regained control of first place in the Northeast. P.J. Axelsson got the game winner for the B's in the shootout when he roofed a backhander to beat Nikolai Khabibulan. Both Khabibulan and Tim Thomas had strong games in goal, turning in 38 and 31 saves respectively.

- Wow, what a goaltending duel!

- Tim Thomas once again put on an unconventional goaltending clinic

- Zdeno Chara laid out Colin Fraser out with a gloved right

- Usually when you have 23 PIMs and 18 shots against in the first period, it makes for a long night. Tim Thomas and the Bruins PK did a great job of keep them in the game.

- Tonight may have been Michael Ryder's best all around game so far in a black & gold uniform. Even though he didn't get on the score sheet, he turned in a solid game in all three zones. He created several scoring opportunities, did a great job of forechecking, and played a very physical game. It also seems like Ryder and Bergeron are starting to click better on the ice.

- I questioned Claude Julien's decision to go with P.J. Axelsson in the shootout, but it turned out to be the right move.