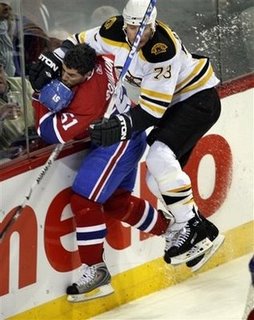 The Bruins were able to beat the Canadiens in the shootout last night to gain control of first place in the Eastern Conference. Milan Lucic and Matt Hunwick were the goal scorers for the B's. Tim Thomas had another strong night in goal for the Bruins. The netminder had 33 saves and stopped all 3 Montreal shootout attempts. Blake Wheeler potted what turned out to be the game winner in the shootout.

- I like NESN color commentator Andy Brickley's idea to replace the shootout by having two guys duke it out at center ice. Maybe Gary Bettman and the NHL's brass should look into this.

- It looks like Claude Julien instructed Milan Lucic not to drop the gloves with Georges Laraque. I can't say I blame him. Laraque is probably the toughest guy in the league and there was already a charged atmosphere inside the Bell Centre, the last thing you want to do is give the Habs more momentum. You know Looch wanted to test himself against the big fella, but is smart enough to know what is best for the hockey team.

- Matt Hunwick has 5 points in his last 4 games (2-3-5)and has done a great job filling in for the injured Andrew Ference.

- Zdeno Chara logged 31:01 in total ice time last night. That was his second highest of the season. The game where he had the most time on ice this year also came against Montreal back on October 15th when he recorded 31:24.

Stat of the Night: 29 Blocked Shots by the Bruins