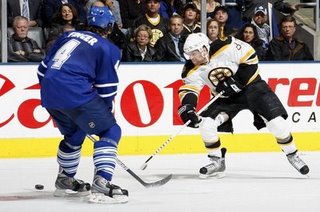 (Photo by Dave Sandford/Getty Images)
The Bruins were able to hold off the Toronto Maple Leafs last night and earn their 11th victory of the season. Matt Hunwick recorded his first NHL goal in the win.

- I'm not sure how dropping your gloves before the puck is even dropped isn't called an instigator penalty.....oh well.

- Great shot by Michael Ryder to beat Toskala up top.

- Did anyone catch the super awkward moment in the first period between Marco Strum and Vesa Toskala? For some reason Sturm skated up to Toskala, got right in his face and flashed him a big shit-eating grin.

- This game was pretty sloppy and really lacked any kind of flow.

Stat of the Night: Dennis Wideman had 8 blocked shots

Shocking Stat of the Night: Blake Wheeler recorded 2 hits. I was starting to think that maybe his buddy Phil Kessel had told him that the NHL was a no-check league.

Let's check in with my favorite Leafs fan Steve Dangle for his take on the game. What do you have for us Stevie?