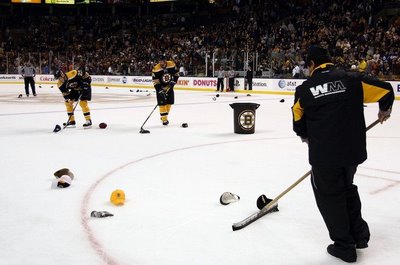 Bruins rookie Blake Wheeler, who scored his first NHL hat trick, led the way for the B's as they defeated the Toronto Maple Leafs last night at The Garden. The win is the Bruins' 5th in their last 6 games. Tim Thomas made 34 saves to preserve the victory for the B's.

- The B's did a great job of taking advantage of power play opportunities early in the hockey game against a team that has trouble killing penalties. 2 PP goals in the first period isn't a bad way to start a game.

- #26 may just be Blake Wheeler's lucky number. The rookie changed his number from #42 to #26 before last night's game. It seems to be working for him. #42: 12 GP 3 G; #26: 1 GP 3 G. Wheeler was showered with hats (and at least one undergarment) after deposited his 3rd goal of the night into the empty net. Somewhere on the South Shore there is a bra-less teenage girl wishing she hadn't spent $200 on a Blake Wheeler #42 jersey.

- The B's did a great job of getting in front of the net and screening Toskala. I think almost every goal last night was a result of creating traffic in front.

- For everyone that is ready to hand over the Vezina Trophy to Tim Thomas, please go back and take a look at the Mikhail Grabovski goal. Thomas is tearing it up right now, but if there is anything that we know about Timmy, it is that he is very streaky. I wouldn't expect him to keep this up all season.

- While we are on the topic of Tim Thomas, I would like to chime in on Thomas' All-Star ballot snub. I know a lot of my fellow B's bloggers were upset when Tim Thomas didn't appear on the ballot. I have absolutely no problem with the NHL leaving him off the ballot. Chances are the names needed to be submitted weeks ago. A few weeks ago Thomas was splitting time with Manny Fernandez and giving up 3 or 4 goals a game. The goaltender position in the Eastern Conference is extremely deep with Ryan Miller, Henrik Lundqvist, Martin Brodeur (before he got hurt), and Carey Price all playing in the East. That being said, if the All-Star Game were played tommorow, do I think that Tim Thomas should be on the team? Yes, absolutely! I am all for a write-in campaign for Thomas, I just don't find fault with the NHL for leaving him off the ballot. Once online voting officially begins, I will be supporting the write-in campaign.

- ...which was almost as good of a hit as the playful backhand slap that Mike Milbury laid on Kathryn Tappen during one of the intermissions. If anyone can find a video clip of this, please let me know.

I wanted to check in with my favorite Leafs fan Steve Dangle for his take on the game, but he hasn't posted anything yet. I'm sure he will be giving his commentary on last night's game sometime today.