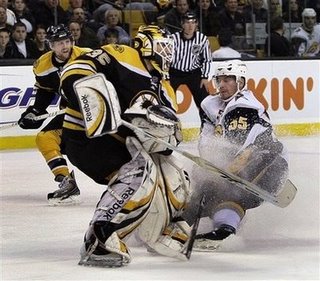 The Bruins were able to out-gun the Sabres and win a wild one tonight at the Garden. The B's have now won 10 of their last 12 games.


- While Chuck Kobasew pulled a move straight out of table hockey to record his second goal of the night:

- I'm not sure who that guy dressed in goalie gear and a #30 jersey for the Sabres was, but that was not Ryan Miller.

- It looks like the Sabres have come back down to Earth after a phenomenal start to the season.

- Maybe Miller and Fernandez knocked a couple back at the Sam Adams Bru Fest before the game. That is the only explanation for that first period.

Stat of the Night: 7 Bruins had multi-point performances tonight