Share All sharing options for: B's look to stay sharp vs. Sabres 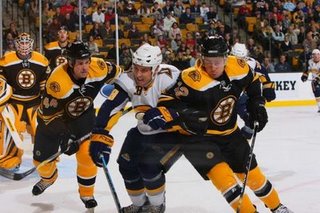 Just who are these Sabres you speak of?
Buffalo Sabres 8-2-3; 19 points (1st in Northeast)

Sabres Trivia
Head Coach Lindy Ruff is now in his 11th season behind the Sabres bench. He has spent more time with his current team than any other active head coach in the National Hockey League.

- Can the B's shut down NHL leading scorer Thomas Vanek?

- With Ryan Miller giving up 5 goals on 26 shots last night, will Lindy Ruff give him the night off and go with Patrick Lalime?

- The B's need to take the game to the Sabres early, just like they did Thursday night against the Leafs. The Sabres have a .833 win percentage when leading after the first period.

- This is the most important game of the season so far for the Bruins. Will the B's be contenders or pretenders in the Northeast Division?

- Blake Wheeler said that one of the reasons he is wearing #26 is because fellow Minnesota alums Thomas Vanek and Phil Kessel both wore the number when they played for the Golden Gophers.

- Will Aaron Ward's favorite husky heckler be in attendance?

- Will Adam Mair be paying a visit to the B's dressing room?

- Will Sabres Goaltending Coach Jim Corsi be able to get any table he wants in the North End based solely on name recognition?


Your face paint is so adorable. How long did you guys have to wait in line with 6 year olds on the concourse to get your face painted? No grown man should ever have his face painted with the number of his favorite player. What? Are you dating the captain of the football team? I would have loved to see these two tools trying to pick up chicks at the bar later that night wearing a Santa hat, a cape, and face paint.