B's ready to put on the foil vs. Panthers

Share All sharing options for: B's ready to put on the foil vs. Panthers 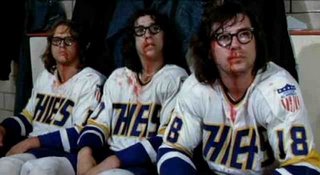 The Boston Bruins are hosting "Ode to Slap Shot" Night at the Garden tonight. As part of the promotion, the B's found the closest thing to a minor league team they could find: the Florida Panthers.

Things to Look for Tonight:

- The Bruins are hosting "Ode to Slap Shot" Night. According to the Bruins website,"The first 10,000 fans in attendance on Friday will receive Hanson Brothers style glasses, courtesy of TD Banknorth. A lucky fan will also receive the ultimate Slap Shot prize pack featuring Hanson staples: grape and orange sodas, aluminum foil and a toy car set. The winner will also have their seat upgraded." Steve Carlson, who played Steve Hanson in "Slap Shot", will be in attendance and signing autographs during the game.

- According to Bish from Bear Essentials, "Tonight is the Bruins first Friday night home game since 1977, the same year Slap Shot was released."

- Toucher & Rich will be broadcasting live from the Makers Mark Lounge inside North Station from 3-7 today. Several former and current Bruins players and executives will be stopping by before the game.

- Tim Thomas will be in goal tonight for the B's

- The Panthers give up the second most shots per game in the NHL (34.2 shots/game).


What is it with Florida sports fans and cowbells? Wow, a shiny object that makes a sound! Cowbells are annoying and lame. Maybe if the Panthers organization put a decent product on the ice, you wouldn't have to drown out the visiting team's fans.