B's Trying to Make a Habit Out of Beating Habs

Share All sharing options for: B's Trying to Make a Habit Out of Beating Habs 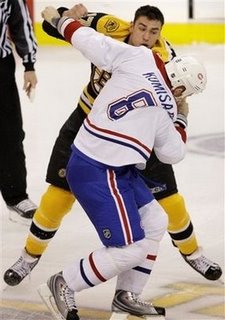 Tonight, the Bruins will try to accomplish something they haven't been able to do in almost 2 years: beat the Montreal Canadiens in the regular season at the Bell Centre. The Bruins are riding a 9-game points streak (8-0-1) after beating the Florida Panthers 4-2 last night at the Garden. Meanwhile, the Habs are coming off a 3-2 win against Ottawa on Thursday night.

Just who are these Canadiens you speak of?
Montreal Canadiens 11-5-2; 24 pts (2nd in Northeast)


- According to Kevin Paul Dupont, Big George Laraque is looking for a dance partner. Will it be Thornton or Lucic who foxtrots with the big man?

- The Habs were once known for their strong special teams play. Now, they are pretty average. They are ranked 22nd in the league on the power play (15.7%) and tied with the B's for 12th in penalty killing (82.1%).

- Will the Habs come out with a little extra effort because it is a special night in Montreal or will the ceremony be a distraction?