B's vs. Sabres: A Tale of Two Teams

Share All sharing options for: B's vs. Sabres: A Tale of Two Teams 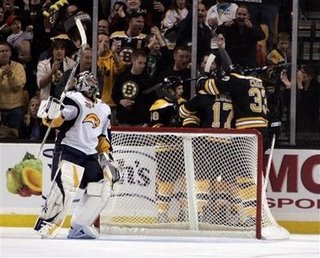 Tonight's game between the Boston Bruins and Buffalo Sabres will showcase two teams seemingly going in opposite directions. The Bruins are currently riding a 10 game points streak (9-0-1) and have not suffered a regulation loss in the month of November. The Sabres meanwhile have lost 10 of their last 13 contests, including their last five. The Sabres started the year 6-0-1 and looked primed to be a contender in the competitive Northeast Division.

Just who are these Sabres you speak of?
You should probably know by now. The Bruins have only played them 4 times in 5 weeks.

In 3 games between Boston and Buffalo this season, there has not been a single fight.

- Tim Thomas will get the start in goal for the B's.

- I'm expecting this to be a better game than the 7-4 slopfest last week.

- Last week, the Sabres called up RW Mark Mancari from the Portland Pirates. Mancari is skating on the third line and scored a goal against the Islanders on Saturday night.

- The Bruins have been a resilient team this year. They are 4-0-2 when they give up the first goal.