Soup du Jour: "Today we have a nice Steve Ott is a Despicable Piece of Garbage Link Chowder"

Share All sharing options for: Soup du Jour: "Today we have a nice Steve Ott is a Despicable Piece of Garbage Link Chowder" 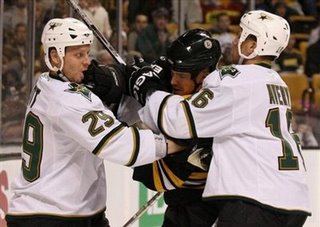 Sorry for the lack of posts this weekend. Between celebrating in the greatest Halloween city in the World and taking advantage of the free fire water at Connecticut Indian casinos, I didn't have much time to chime in on the cowardly play of Steve Ott and the Dallas Stars on Saturday night. Fortunately everyone else who has ever written about hockey has chimed in on the situation.

Fluto chimes in and calls Ott out for refusing to drop the gloves [Boston.com/Boston Globe]

The Dallas Stars "are bursting at the seams like some Under Armour knockoff made in Bangladesh". [Puck Daddy]

Are the Dallas Stars this year's '07-'08 Ottawa Senators? [Here Come the Bruins!]

"Those two spend so much time in the penalty box together, they probably qualify for a common law marriage."- Hockey Journal scribe Matt Kalman on Steve Ott and Sean Avery [New England Hockey Journal]

Some "suburban mom" thinks that if Steve Ott and Sean Avery keep this up "Matty Niskanen isn't going to be a pretty little boy anymore" (as Jack Edwards pointed out the other night)....make sure you read the comments where someone repeatedly calls Marc Savard "Harvard". [Laughs2Loud]