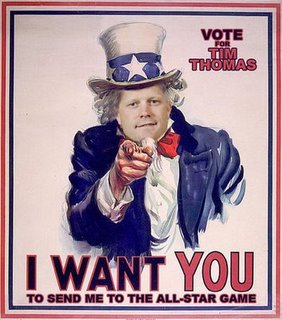 Online voting for the NHL All Star Game officially begins today. Don't let Gary Bettman and those fat cats at the league office tell you who you can vote for. Just because his name doesn't appear on the ballot, doesn't mean he is not a worthy candidate. Write-In Tim Thomas. He's tough on defense and he cares about conserving energy by always trying to keep the light behind him off. He would vote for you...if he had any idea who you were.