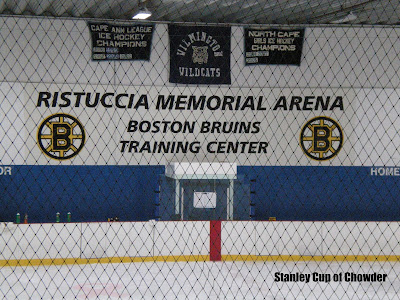 With no B's games until Thursday and in desperate need of content, I decided to head out to Wilmington to check out practice this morning.

10:37
I arrived at the rink a few minutes into practice. It looks like most of the players have the day off. There are only six skaters on the ice (Bergeron, Kessel, Sobotka, Sturm, Wheeler, and Lashoff), plus the two goaltenders. It looks like today is just going to be a light skate for some of the younger guys and players coming back from injury/illness. No sign of Coach Claude Julien. Assistant Coach Doug Houda, Goaltending Coach Bob Essensa, and Cam Neely are running drills with the handful of players on the ice. NESN's Naoko Funayama is filming a segment in the far corner of the rink closest to the B's locker room. 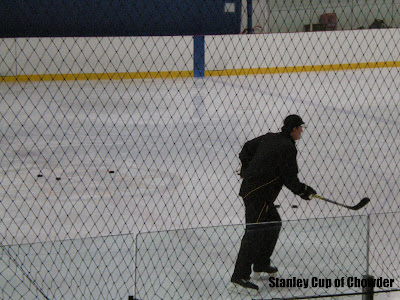 Cam Neely on the ice at Ristuccia Arena

10:45
Phil Kessel playfully shoots a puck at the glass where a cameraman is videotaping.

10:46
Cam is working with a group of young forwards (Kessel, Wheeler, and Sobotka) at one end of the rink while Doug Houda works with the others at the opposite end.

10:49
The Neely group is working on breakaways where they are forced to come in wide along the boards. Meanwhile the other group is doing a one man drill where the coach dumps the puck in behind the net, the goalie retrieves the puck and feeds it a player in the corner who carries the puck to the top of the circle and passes it to the coach at the blue line who immediately passes it back to the player who is now driving to the net. The coach then shots another puck for the player who is now in front of the net to try to deflect. 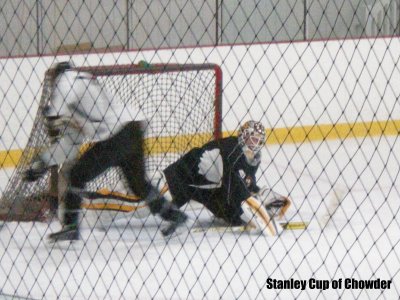 Tim Thomas flashes the right pad to try and make a save.

10:53
The Houda group is now working on a two man shooting and passing drill.

10:55
The Neely group continues the work on the winger breakaway drill. Blake Wheeler lets out a loud "Yes!" after getting one past Tim Thomas. Kessel and Wheeler are joking around with each other during the drill. Things seem pretty light around the rink today. Neely has decided to jump into the drill and takes a couple shots on Thomas. He also begins to play the role of defenseman for this drill, turning the 1 on 0 into a 1 on 1, although he is really just trying to put a body between the shooter and the goal.

10:59
NECN's Mike Giardi shows up with a cameraman.

11:02
Kessel and Wheeler seem to be making a competition out of this drill, complete with some good-natured trash talk.

11:06
Cam Neely and Coach Houda work with Kessel, Wheeler, and Sobotka while the others take a breather. 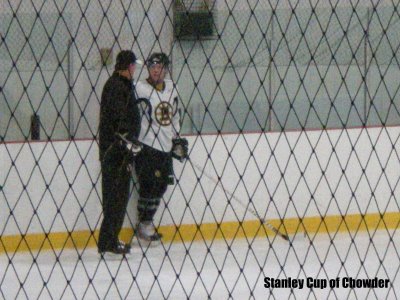 Cam Neely goes over a few things with Phil Kessel

11:13
Tim Thomas asks Bob Essensa "Are we wrapping this thing up soon?". The Bruins are scheduled to visit 7 Boston area hospitals this afternoon to visit with sick children and hand out toys. This is a tradition started by Ray Bourque during his playing days in Boston. Now, P.J. Axelsson is responsible for organizing the charity event. Axelsson could be seen at the rink periodically throughout the morning lugging boxes and bags from the Bruins Pro Shop, presumably in preparation for the hospital visits this afternoon.

11:15
Thomas and Essensa are having a conversation out near the blue line until Manny Fernandez comes over, "They want to switch goalies. They are tired of me." Manny out, Timmy in.

11:16
Being at practice, you get the sense that there really is great team chemistry with the Boston Bruins.

11:18
Tim Thomas and Cam Neely head off the ice and most of the players follow shortly after.

11:19
Things are winding down. There are only a few players left on the ice. Marco Sturm and Patrice Bergeron are doing a goal line to blue line shuttle drill while Doug Houda looks on. Both players are coming back from injuries/illness, so they are probably just trying to get their skating legs back. Manny Fernandez is over on the far side near the benches talking to Bob Essensa.

11:22
Another camera crew shows up. It is good to see the B's getting some media coverage. I guess that's what happens when you start the year 21-5-4.

11:32
Bergy sets up 2 pucks on the ice and stands stationary while stickhandling another puck through them in a figure 8 pattern 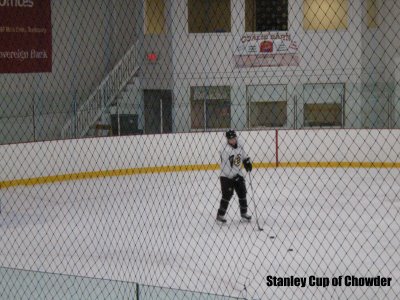